David Walsh, CEO of GENBAND, took the stage at Perspectives14 and started his presentation talking about the importance of speed – saying the world is changing very quickly. He said there are twice as many people on the map than there were 45 years ago and then segued into the fact that 880 billion photos are taken per year. 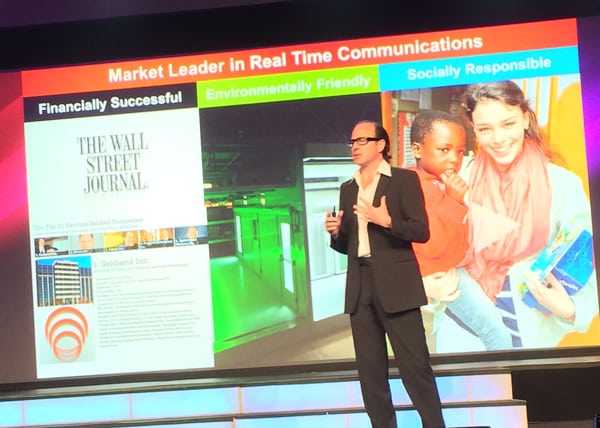 “If you have fast pipes, ubiquitous access and over 3 billion devices, you get enormous change,” he said. He then showed a chart of the national debt on the right and the number of connected devices on the left. U.S. debt is spiraling out of control, he said to audience laughter. He also said we generally ignore it – more laughter. He then said the growth of devices is how we’ll likely pay for the debt.

Walsh says his company cannot support the customer unless they are financially successful – which they are, citing a story from the Wall Street Journal. They have to be socially responsible and environmentally friendly as well.

His point is that the handheld devices we use are generally powered by coal.

The presentation then took a turn into the realm of sports – as he explained that you have to win in business and winning is fun.

He talked about NextPoint – how he got involved in this business – realizing that the investment made in this company was an issue because the company was too small to sell to carriers. This led to the GENBAND investment and acquisition, then Nortel, etc. I covered David back in 2007 after this investment, as you may recall.

GENBAND’s goal is to exceed 40 percent market share in all the segments they play in such as application server and SBC. Walsh talked about OTT and WebRTC and how his company is years ahead of other companies in terms of R&D. “You have to be ahead of the curve in R&D,” he explained.

Candid advice offered to service providers was to protect the installed base while exploiting growth markets. He gave an example of WebRTC being embedded into websites to facilitate commerce. PSTN revenue is over $100 billion yet investment is just over one-billion dollars he explained, creating quite a mismatch.

He believes the industry can be transformed with $7 billion, resulting in over a billion dollars in power savings.

David then talked about the triple play from last year’s presentation, which involved finding a date (Tinder, etc), getting a ride (Uber), grabbing dinner – and this year it became the quadruple play – as you can find a room with airbnb.

“The market is designed to reward people for success like never before,” he emphatically explained.

He closed by talking about what we’ll this week – presentations on WebRTC (I’ll be on the panel tomorrow at 10:00 a.m.), virtualization and specific product launches and more.