Smart home services are gaining a lot of ground, as more and more people discover the convenience and improved peace of mind a smart home can generate. Recent word from Juniper Research suggests that this field is going to gain a lot of ground fairly quickly, passing the $100 billion mark in revenues by 2020.

That by itself is an impressive number, but it’s the jump that should really catch the attention. For 2015, the smart home market has an estimated spend of $43 billion—estimated because there’s still the holiday season left to go—so that’s better than double in just five years, a huge gain for any market. One of the biggest things driving this market is that it has a substantial number of components; smart home features include home automation tools, but also tools related to energy, health, and even entertainment. Even some houses no one would consider smart have smart home elements; a subscription to Netflix is technically part of the smart home ecosystem.

Home automation tools, meanwhile, are also gaining ground, and the study found that the building of “lifetime value” is increasingly important. Makers like Nest and SmartThings are bringing subscription services along with the hardware, so users are not only buying material today, but are also paying for the extra services, providing value that builds on initial purchases, not stops once the purchase is made. Meanwhile, over 20 million connected appliances are expected in place by 2020. Samsung even reportedly expects all of its appliances to be connectable by 2020, though actual use of the connected features may be low.

The report threw in some other bonuses, including the use of “hands free” control systems like voice activation, which are expected to be the main interface between users and devices. But as 2020 approaches, more wearable devices will also be in play, supplying “quantified self” data to smart devices for control from there.
Image via Shutterstock

Smart homes in general are a goal for many, though execution isn’t always the greatest. A couple years back, we were hearing stories about how it took both tablet and smartphone to control all the systems in a smart home, and even then there were some issues. 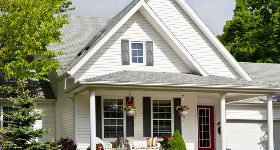 But technology improves, and with that improvement come better systems. At the rate that improvement’s going, the idea of a house that can sense when its owner’s body temperature is uncomfortably high and activate air conditioning accordingly isn’t out of line. But with all this new connectivity will come a greater demand for bandwidth; will our Internet systems be ready? We already have a hard enough time getting bandwidth caps sufficient to stand a week’s worth of Netflix binging; will the network of 2020 also be able to withstand every appliance in the room connecting?

It’s clear, however, that the smart home is on track to being a major part of the home environment, and that means good things for users. Though without accompanying investment in the network and other parts of the picture, though, the smart home may ultimately end up a dunce.